The second in our 'exit interviews' catching up with our two new authors a few weeks after their book releases. Today our Lawrence and Gibson intern asks Brannavan Gnanalingam for his thoughts... 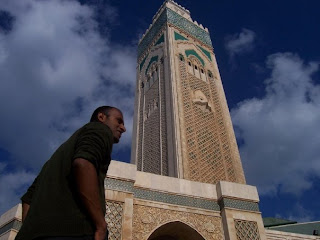 Q: Mr Gnanalingam, so you've released a book then... what was the moment when you first felt that you were 'in print'?
BG: It's quite an odd feeling.  You spend so long seeing it as a word document, that seeing it as a proper, tactile thing is partly thrilling and partly terrifying because you suddenly realise it's something that people will pick up and judge. It's also nerve-wracking that the interpretation of the book is now completely out of your hands - I can't direct people anymore and say what I think the book is about because my opinion no longer matters.
Q: But do you also find that people have come to you seeking clarification (given that Getting Under Sail does mash a little fiction in with the travelogue)?
BG: Yep, it's the fictional versus travelogue aspect that I've discussed most with people who have read it. While the events for the most part happened, the characters and the way people react/interact is mostly fictional.  The three main characters are my own imagination.  I'd think the fact I told it from a first person point of view may have confused people into thinking the narrator is me - it's not entirely the case.  I'm not as much of a snob as the narrator for a start.
Q: As a debut author, but long term arts critic, how do you see the state of publishing? How has your experience of getting published affected these views?
BG: It seems like quite a hard market to break into. There's that Catch-22 situation of no-one publishing you if you haven't published a book before, which makes it difficult for any young writer. Also, if you're not attached to a reputable publisher, it makes it difficult to get reviewed or taken seriously by a book shop, which further compounds things. As a reviewer, I've reviewed young and/or new and/or obscure artists, but never really thought about where as a reviewer I stood in the whole scheme of things - I think this process will hopefully be a spur to ensure that I don't end up playing the game of ignoring the battlers.
Q: How do you think the online retail trade and e-books will effect these small publishers?
BG: There'll be still the same issue of distribution, which has held back the small publishers for centuries. A book is an artform that requires a bit of a time commitment - it's not like a song that you can simply hear on the internet and decide if you like it.  You still need either that critical assistance, or that harder to get word of mouth thing.  I'm not sure if e-books will necessarily help. Do people listen to more music now that there are i-Pods with huge space, or does it simply change how people consume something they would already have consumed?
Q: If you will, describe the best state of mind that writing a book puts you into?
BG: I read this study the other day about how porn puts people into this weird trance. I guess writing does a similar kind of thing - you do lose sense of time and space and all that jazz. Though writing is much more of a slog, probably doesn't have that money shot at the end.
Q: Do you have a routine that allows you to get into this trance? Any requirements, like complete solitude or a background noise of a public transport system?
BG: I'm pretty ad hoc with my writing habits. I maintain a notebook of thoughts/observations during the day, and then if I can at night put them into whatever I'm working on at the moment. In the weekends I try to write more in the mornings - I don't like doing anything until I've bashed out a good amount.
Q: And the worst? Are their pits of horror, abysses so plural and profound you wish you'd never plucked your quill from the duck's soft underwing?
BG: It's usually a cathartic process, so usually the depths are splurged onto the page. It's more the fear that someone you know might recognise themselves in something you've just writing, and you know you'll have to try to pretend that you made it up.
Q: If you could advise on what two books should bookend Getting Under Sail what would those books be?
BG: Hmmm, I haven't read a lot of travel writing so it wouldn't be anything like specific travel writing (though Ryszard Kapuściński's The Shadow of the Sun was an influence). I'd say A Bend in the River by VS Naipaul (Getting Under Sail tries to attack the racist structuring of that book - and frankly baffling critical adulation that A Bend in the River seems to have received) and Under the Volcano by Malcolm Lowry, mainly because the narrator is such a wannabe Geoffrey Firman.
Q: Going forward, that is to say, moving forward, what would be your ideal circumstances for a writer in residence position.
BG: I'm a big city person, so somewhere like Paris, or Buenos Aires, or Accra, or Istanbul would be ideal - someplace with a lot of things going on, and enough to keep me distracted.
Q: And in that city how would you spend your days and nights? Writing by the first lights of dawn or by the reflected arc of some flickering streetlamp? What foil would keep your writing in its most trance-like state?
BG: If I didn't have to worry about making a living, I'd write in the morning, spend the afternoon wandering around, and spend the evenings trying to be social. Routine would be my best friend, but it's quite a hard/limiting thing to try and get.