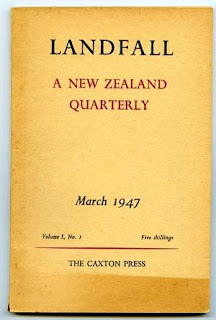 When Richard Meros saluted the Southern Man in 2006 he noted how the city of Dunedin was obviously made of the climate that surrounded it: weatherboards as barely concealed strips of timber, the mason's rock, tin rooves curling like an overgrown toenail. And so on. But Dunedin also has a sharp, cold and violent lip that bear's its teeth at Wellington's approximations of style and Auckland's sleek wealth. It was the home of the Dunedin Sound and if certain circumstances conspire it would be the home of Lawrence & Gibson. That said, since half of the collective did undergrad degrees there it is certainly the home away from home for many of our kin.

And so we announce that an online version of Landfall, straight out of central Dunedin, has published a review of Richard Meros' Zebulon and Brannavan Gnanalingam's Getting Under Sail. The review in question is here. I won't deign to summarise the contents of the review for regular readers of this blog, for the review speaks for itself. Nor will I provide critical appraisel for the review, for the reviewers should be the ones to review themselves.

In lesser news, I, Stephen Kawariki, am on holiday and will not be updating the blog for a month or two. I will have James Marr fill in the blanks if he is not too busy with the psychologically uplifting task fo binding, invoice arranging and couriering. Ti he to commerce! Ti he to Landfall!