He tried to save New Zealand by becoming Helen Clark's young lover... He failed.

Now, the Chapman-Tripp® award-winning Richard Meros is back, with a  new nuclear-PowerPoint® to prove. The number-8 wire nation faces extinction, our pioneer culture eclipsed by the globalised Fonterra® farmer with a Facebook® account. Meros alone holds the key to our salvation – the craggy New Zealand hardness that still glimmers within the most urbane of latte-drinkers. The spirit of The Southern Man.

This is the initial blurb for the new adaptation of RK Meros's Richard Meros salutes the Southern Man book for performance in March 2012 at Bats Theatre, Wellington. 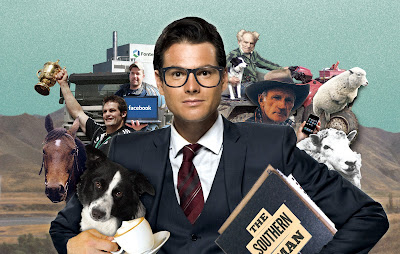 I think that one of my favourite lines of that whole book was not written by Meros, but by one of our fly-by-night interns who composed the press release for that book in 2007. It goes like this: “There is a difference between these people and you and I,” Meros affirms, “while we sit here sipping our frappa-mocha-whatevers, they are dealing with the intimacies of living close to their earth. Their bodies become hard while we peddle our papers.”