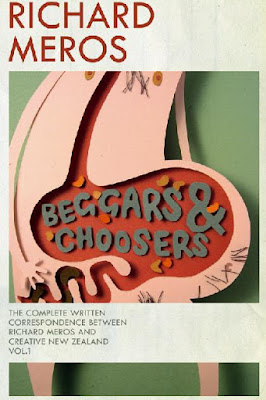 Love, they say, does not make the world go round. Therefore, in 2008, as debit recedes into credit, Richard Meros, author of “this decade's runaway underground publishing hit” (NZ Listener, August 2, 2008), is faced with issues more pressing than young love – he has to pay the rent.

While, the beneficiary industry may take care of his base needs, Meros now must woo another benefactor, he must bat his eyelids and smile coyly all in the attempt to attract the attention of Creative New Zealand.

“It's simple to get on the dole or the sickness benefit,” Meros contends (Editor's note: O, for those halcyon days).

“But for those really keen on fiduciary buoyancy, the grand prize sin qua non, is a grant from Creative New Zealand.”

Yet the task proved a true challenge, as the institute’s fickle gaze scanned its suitors and settled elsewhere.
“As I struggled to accept the platitudes of rejection I realised that my time would have been better spent writing an actual book rather than accruing the sample pages and other assorted minutiae required by a funding agency,” Meros explains.

“As I stacked the screeds of rejection letters to be ceremonially burnt I realised that maybe, after-all, I had written a book. And so I christened it Beggars and Choosers: The Complete Written Correspondence Between Richard Meros and Creative New Zealand Volume One.”

"Though CNZ and Meros’ relationship is often fraught with heartbreak, it is a joy to watch the progression as it blossoms into this darkly hilarious collection." - Books.Scoop.co.nz