Here is a square bit of the cover for Richard Meros' new book which we are now leaning into the promotion of. So far we've had a bite or two from National Radio, the hungry fishies that they are, but in the river of popular media there are no catch limits. You can hook and land as many as you wish. So we're going to set out our lines and sinkers, chew on some seeded grass and lay back on the river bank like Huck Finn and wait for the bites. Or maybe we'll forsake fishing and just look at the clouds and ponder what those leaden forms resemble.

In other news, thanks goes to Contradiction for posting on Hone Harawira and for alerting us to/constructing an in-depth wikipedia page for On them conditions and those possibilities of dat state-lady doin' dat ting wit that boy, yo. 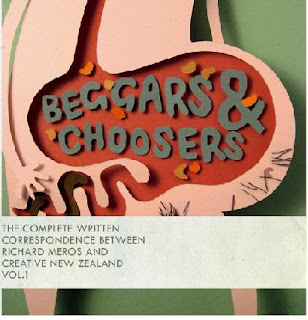 Love, they say, does not make the world go round. Therefore, in 2008, as debit recedes into credit, Richard Meros, author of “this decade's runaway underground publishing hit” (NZ Listener, August 2, 2008), is faced with issues more pressing than young love – he has to pay the rent.

While, the beneficiary industry may take care of his base needs, Meros now must woo another benefactor, he must bat his eyelids and smile coyly all in the attempt to attract the attention of Creative New Zealand.

“It's simple to get on the dole or the sickness benefit,” Meros contends.

“But for those really keen on fiduciary buoyancy, the grand prize sin qua non, is a grant from Creative New Zealand.”

Yet the task proved a true challenge, as the institute’s fickle gaze scanned its suitors and settled elsewhere.

“As I struggled to accept the platitudes of rejection I realised that my time would have been better spent writing an actual book rather than accruing the sample pages and other assorted minutiae required by a funding agency,” Meros explains.

“As I stacked the screeds of rejection letters to be ceremonially burnt I realised that maybe, after-all, I had written a book. And so I christened it Beggars and Choosers: The Complete Written Correspondence Between Richard Meros and Creative New Zealand Volume One.”

But why would anyone be interested in reading such an esoteric collection of failures?

“These [applications] are not simply letters,” he affirms.

“They are a statement on the human condition, where ethos and pathos tangle with Meros.”

Each application that makes up Beggars and Choosers features ten pages on a diverse range of topics. Throughout the two-year process, Meros tries his hand at writing on killer cannibal hippies, while later he looks at the struggles of a young liberal coming to terms with his conservative nature. He even grapples with penning a guidebook to the myriad of threats facing a refugee seeking to settle in Wellington.

Unifying this compendium is the story behind these writings, via the re-printing of both Meros’ application letters and the responses from CNZ, which bookend each application. In turn, readers will be met with a cliff-hanger ending that sees Meros finally facing up to his shortcomings, and laying his soul, along with the project, at the feet of the CNZ administrators.

Beggars and Choosers will be launched on Friday September 12, at Downstage Theatre, Wellington. The release will also mark the homecoming of the adaptation of Meros' first book, On the Conditions and Possibilities of Helen Clark Taking Me as a Young Lover, a one-man play that sold out at BATS theatre earlier this year and has since toured nationally to rapturous acclaim.