When Helen Clark failed to heed the logic of Meros’ On the conditions and possibilities of Helen Clark taking me as her Young Lover in 2008 she also lost the leadership of the nation. But Helen’s error does not stand alone. In 2008, according to Treasury, errors in love not only cost the New Zealand economy a whopping $600 million in lost productivity, but an immeasurable quantity of happiness.

Richard Meros is now amongst Aotearoa’s saddest of the sad. In early 2009, left wing bloggers, embittered by Helen Clark’s failure to secure a fourth term, turned on him. Like Salmon Rushdie evading his fatwah, Meros left his fixed abode for a life of freedom camping. Shaken, and with only a shonky laptop and a Toyota Townace to his name, Meros analysed Helen’s failure.

His answer came in the form of the unassailable logic of free market economics: Helen failed to take Meros as a Young Lover for she was already contractually obliged to a monogamous relationship.

“To save such future errors the National government needs to privatise love,” Meros claims.

“Only the private sector’s know-how and can-do, along with glorious technological advancements, will dissolve the nation’s heartache. Mr Key, if you are listening: privatise love or suffer the same fate as Clark!”

The problem: how can Meros convince the leader of the National Party, the Rt. Hon Key, that the policy of Privatising Parts is what the constituency needs?

“Some may think that our man’s new oeuvre maneuvers towards deep manure,” says James Marr, a co-editor of Lawrence and Gibson. “But Meros has laid diamonds in the roughage.” 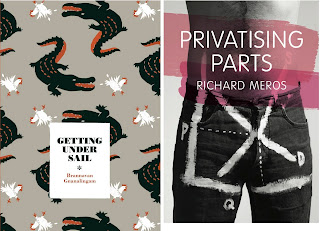