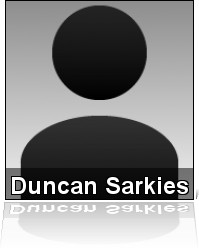 In 2012, Lawrence & Gibson will engage with Duncan Sarkies in a bit of the old quid pro quo. Sarkies will have his 1999 VUP collection Strange Thoughts and Nose Bleeds expanded and culled into a moderner recollection of his works. He has also produced an introduction to the 2006 Richard Meros tract Richard Meros salutes the Southern Man which shall be performed by Arthur Meek and directed by Geoff Pinfield across the depth and, dare I say, bredth of Aotearoa/New Zealand.

We don't yet have a blurb for Duncan, but we took this from another website, translated it into Yiddish and then into Welsh, thenback into English to plumb the depths of his psyche:

Sarkyes, dunkan (1970 -) is a playwright, screen writer, fiction writer and stand - up comic. The rhythm and energy of performance is an important aspect of his written work. He is best known as co - author, along with his brother Robert sarkyes, from 1999 skarfyes highly successful film.
Skarfyes is shown in international film festivals including the ability and sundanse, and was released in New Zealand quickly became one of the nation's best - film grousing locally.


As a Christian Knox writes in a book of New Zealand, sarkyes talent is' [s] the reality of the Internal Housing Works on average - up human brain is a terrible place and Torturous ... Sarkyes Likes to show the ways in which we all are, if not quite mad, and at least some Unhinged ... As Jeanette Frame or Doris Lessing, and you can venture into the terrifying world of madness that is familiar. '