it's not just a poster, it's a book cover!

Right. New Southern Man edition printed and glued together. PR sent out like bats out of hell.  To wit: 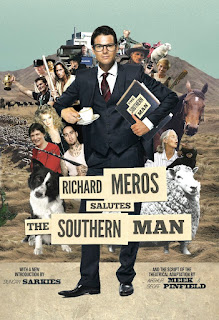 Q: Is there a place for the Southern Man in today’s New Zealand? Discuss.
When Richard Meros salutes the Southern Man was first released in 2007 there was an expectation that a National government would save the habitat of this rare creature. One term into that National government there is even more despair: the Southern Man is close to extinction.
The March 2012 reissue of Richard Meros salutes the Southern Man contains a new introduction by man-of-the-south Duncan Sarkies (Two Little Boys, Scarfies). A pure veneration of the spirit of the deep south, the occasion for this reissue is the adaptation of the book by the same team that scorched the halls of power with the award winning adaptation of Meros’ first book On the conditions and possibilities of Helen Clark taking me as her Young Lover.

“There is a difference between these people and you and I,” Meros affirms. “While we sit here sipping our frappa-mocha-whatevers, they are dealing with the intimacies of living close to their earth. Their bodies become hard while we peddle our papers.”
As foreign-owned corporates and co-operative conglomerates establish a foot-hold over New Zealand agriculture, Meros takes stock of the legendary Southern Man.
Does he exist?
Where might I find him?
What of the Southern Woman?
“I salute you, Richard Meros, for reawakening me, and I stand behind you or beside you (whichever you prefer) and I join you, humbly and fervently, in your salutation of the Southern Man.” –Duncan Sarkies, Two Little Boys, Scarfies
“Meros ... (is a) literary spirit to be greatly encouraged, prankster descendant, dare one say it, of Laurence Sterne. And I can think of no higher praise than that.” - Guy Somerset, The Dominion Post, dompost.co.nz