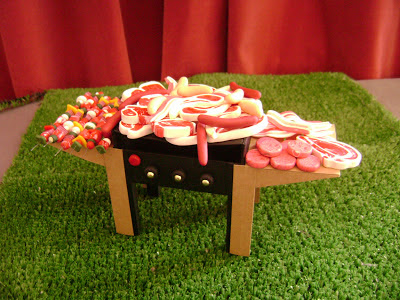 Exactly a week after the launch of the three most recent Lawrence & Gibson titles, Meros returns to Downstage to launch one more book. It is called $30 Meat Pack. It will be launched at 6pm on Thursday the 22nd of November at Downstage theatre. The night also marks the preview night of Richard Meros salutes the Southern Man at the same theatre.

The artwork for the cover is from Hannah Salmon, the artist behind the Daily Secretion series. This piece was originally exhibited at the Concerned Citizens exhibition that rised money for the Urewera terror raids defendents. It is titled: 'bouncing from cloud to cloud on the warm updrafts of his nation's confidence; on New Zealand's desperate conviction that politics be the province of ordinary men and women'. The original featured a lovely rotating base and the Rt Hon Key getting his grill on, with his grill blinging like twinkel twinkle lil' star.

“Survival of the Friendliest” serves publishers well
As the publishing industry continues to hit the e-Potholes of the digital age, Wellington publishing collective Lawrence & Gibson survive on the mutual aid and DIY policies that kiwis have embraced since Maui rowed his boat ashore.

Take a look at their forthcoming book $30 Meat Pack by Richard Meros:

The cover is an image from Wellington artist Hannah Salmon. The pages were bound in the Trades Hall on Vivian Street at anarchist publishers Rebel Press. While, the content was formed over late night discussions with other members of the collective.

“Survival of the friendliest”, James Marr of Lawrence & Gibson, likes to call it.

The full title for the new book is another long one: $30 Meat Pack: the complete written correspondence between Richard Meros and Creative New Zealand volume two. The book imagines how Creative New Zealand, under a right wing government, is restructured into Reactive New Zealand. The new department is charged with only making art that expands the nation’s happy-go-lucky spirit.

With two new books to match two touring theatrical adaptations of his other books, Richard Meros is looking to take his 2012 Wellington “cult following” (The Dominion Post, October 2012) into a national movement.

“Labour needs me,” he mulls, “they’re so out of ideas that they’ve booked out a whole session at Downstage. They’ll be taking notes, presumably. What they really need to do is hire Arthur, Geoff and me to run their 2014 campaign. Easy as that. David, Grant, and any coup-plotters in the wings: our lines are open.”