Credit in the Straight World interview with Brannavan Gnanalingam 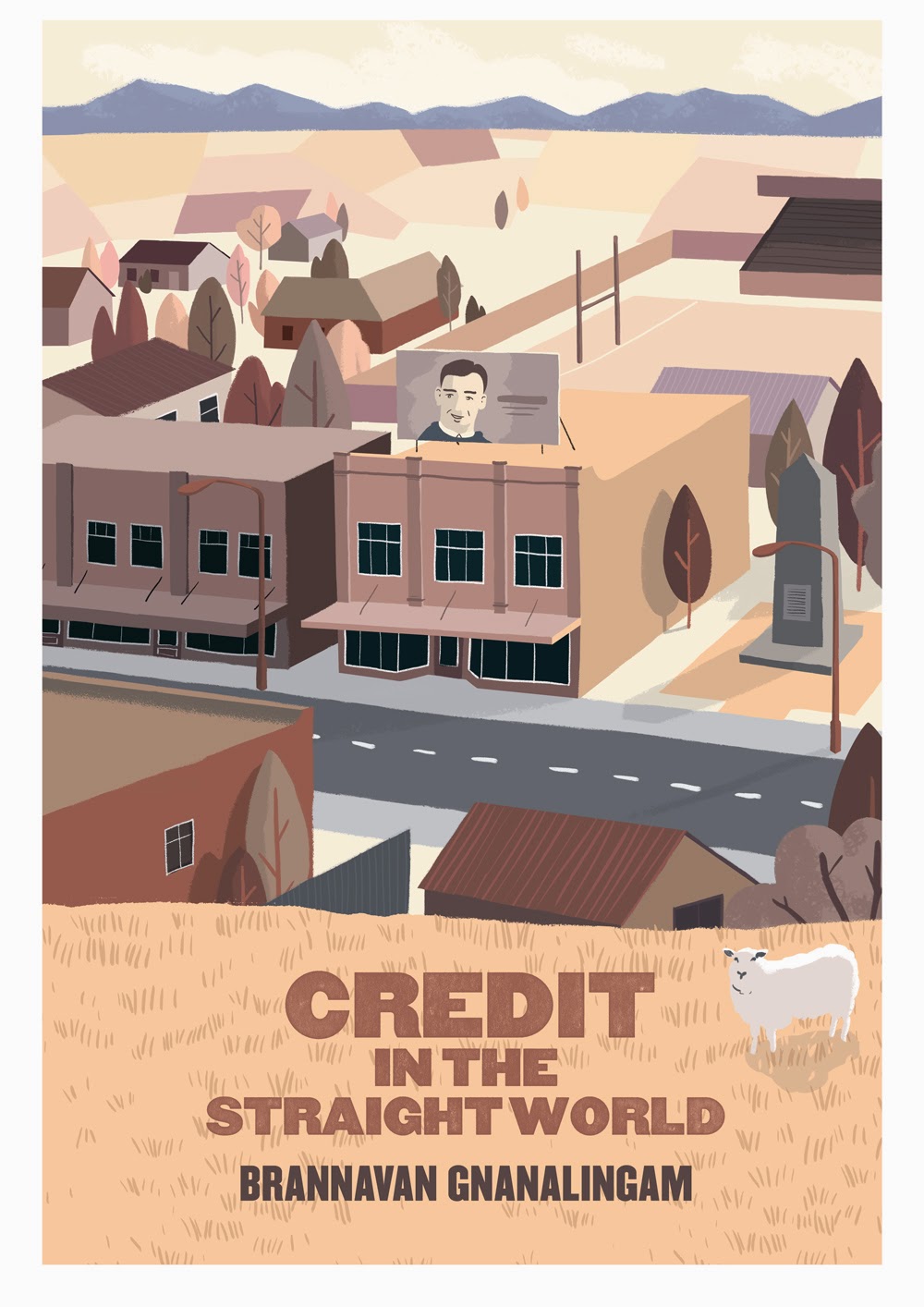 Good morning Brannavan. This new book, Credit in the Straight World, is your first to be set in New Zealand. Is New Zealand the straight world?
Why not?  A Canterbury Plains State Highway 1 world.

I'm curious about the concept of 'credit'. There have been many writings and documentaries in the last decade on debt and credit, but I'm wondering if there is any economic, social, philosophical, or perhaps even literary, treatment of credit that inspired your writing.
Credit is given to somebody on the basis of hope, belief, expectation that you would get something back in return (interest!).  You've got no guarantee that when you lend somebody $20 or buy a round of beer, that you'll get it back in kind.  Sure, the banks and finance companies will model and assess risks, and probably financially be more successful than if I set up the Brannavan Gnanalingam Finance Company Limited today and started lending money at 2% interest to Lawrence and Gibson.  But ultimately, there seems a quasi-faith aspect to the functioning of credit.  So naturally, I was drawn to Kierkegaardian concepts of deism to look at the nature of faith and capitalism.  Who wouldn’t be?
Also, Balzac. Lots of Balzac.  Money, credit, power, and manipulation of markets – that's Balzac 101. The 19th Century writers like Dickens, Zola, Trollope, and Balzac were writing about a capitalism that was arguably simpler, but fundamentally not all that different in its operation and its interplay with power.


Do you have a personal view on where - and forgive the breadth of the question - on where the world is now, seven years after the Global Financial Crisis?

Now I'm no big-city economist, but it strikes me as no different to where it was before.  Although arguably, things are worse in that we've gone through a spectacular collapse and couldn't be bothered changing anything.  There has been little consideration of why the GFC happened, of what its actual consequences were on the people who suffered in it, little critical thought as to why New Zealand's finance companies got themselves into such a vulnerable position, and whether our faith is misplaced.  Either that or I'm lazy in my research. The book is structured around the cyclical nature of collapses, and it's obvious that it's going to keep on happening unless something fundamental and drastic changes.  The complete insanity of the Auckland housing boom is an example that perhaps our faith in markets is more than a bit irrational.

Were you lazy in your research? Perhaps you could tell us a little about the research that went into the writing of this book.
No, in fairness, I spent a lot of time researching.  Days were spent in libraries and also spent eavesdropping on conversations.

Recently Eleanor Catton was told off by none less than the Prime Minister for daring to comment on neo-liberalism. If you could be told off by any present member of the National Party who would it be and why?
Can I go historical?  I'd be told off by George Forbes, the United MP who was prime minister between 1930-1935.  That government was obsessed with trying to balance its budget for faith reasons as it would show that it's a safe pair of hands during the Depression.  My mocking of his government in my book would likely cause some choice words from Honest George, the good member for the Hurunui.

A fine choice. Can you imagine anyone within the fifth National government who might enjoy the book, say, as a Christmas gift?
I think this would be right down Michael Woodhouse's alley.

You're also a prominent film critic for the Lumiere Reader. Did any films influence the aesthetic or character choices for the book?
Definitely. Lav Diaz's film Norte the End of History incorporates Dostoevsky and the punishing of "the idiot" in a way that was definitely integral to my treatment of George in the book. Kira Muratova's films mix black comedy and social commentary, and her incredible GFC movie Melody for a Street Organ was an inspiration in terms of that film's tone and fearlessness. Carmella Soprano – and her guilt/victim/wilful blindness – helped form the voice i.e. someone who felt guilty but keeps on coming up with excuses to justify his or her position.  The Springfield of The Simpsons was my basis for a fictional small-town.  I could name hundreds of movies, but also to mind: the tragic inevitability in Douglas Sirk's films, the satire of the banal in Hong Sang-soo and Corneliu Poromboiu's films, the cruelty (and humanism) of Ulrich Seidl, and the straight out humanism of Pedro Costa.
[Editor. Reviews by Gnanalingam for some of these films can be found here: Norte; Melody for a Street Organ; Our Sunhi by Hong Sang-soo ]

What's next for you in terms of writing?
I'm working on a book about cricket.  I love cricket. I look forward to retiring so I can watch all five days of a test match.  But specifically why do people collectively come together and do things these days.  We apparently live in a post-structuralist, neo-liberal, selfie-stick world, but yet (some) people still want to do something collectively. Why??

Your day job is as a lawyer and I wonder if you've thought of incorporating more from that world into your writing. Have you? And what would be the best genre for a novel drawing on the legal profession?
I think the attention to detail and pedanticism (which I need to work on) would work well to write espionage thrillers. Franz Kafka trained as a lawyer too, so the er, Kafkaesque 'genre,' could be a goer.

Thanks for your time. It's been a pleasure. One last question: is there any artistic, musical, theatrical or literary scene that excites you in New Zealand today? Is there anything you're looking forward to in our cultural community?


There's always good stuff happening around the place.  There's great music happening in Wellington: the folk at Sonorous Circle and Home Alone Record in Wellington along with folk like the All Seeing Hand, Grayson Gilmour, Orchestra of Spheres, Glass Vaults etc. etc.  I'm looking forward to the moral panic that may hit Simon Denny's appearance at the Venice Biennale, and the continued excellent literary output (which despite less mainstream arts coverage, less funding, and fewer publishers taking on fewer books) is still producing exciting stuff.

PRESALES - LAUNCH ON MAY 1